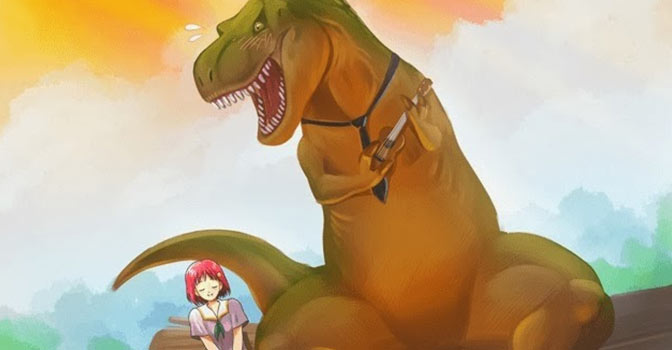 While a relatively obscure video game genre outside Japan, a dating simulator is just that: a game where you play a character in a world where everyone has a crush on you. Popularized by Konami’s Tokimeki Memorial, first released in 1994, it eventually was ported to nearly 10 different platforms.

With time comes improvements, innovation, and of course deviation. Here are the top 5 weirdest dating sims ever released. Click the title to learn more, many of them are free!

Let’s start things off with a tame gender reversal! In this alternate reality dating sim for the PSP, Prince Arthur is actually a princess, and you get to be courted by the thirteen knights of the round table. Sorry ladies, this game is only in Japanese. Time to get learning!

Ever felt cheated in life because you can’t date a tyrannosaurus rex? Jurassic Heart is as close as you’ll get to reincarnating in the past, go ahead and woo Taira the T-Rex in this free-to-play game.

A pun on the word hato (pidgeon) and how the Japanese pronounce heartful, this dating sim takes place in a world populated by anthropomorphized pidgeons. At least it isn’t cross-species lovin’ going on like Jurassic Heart.

Ever have a crush on your brother? No, not your real brother silly, that’s gross! I meant the printer company. Wait what?

In this free to play game, you’re an average human girl that has feelings for a Brother printer. Play your cards right, and maybe he’ll let you change his ink.

In Tomak, a goddess of love descends from heaven, and you must love her to save mankind, but there’s one problem: she left her body in heaven, meaning that she’s just a head stuck in a flower pot. Pictures speak a thousand words: