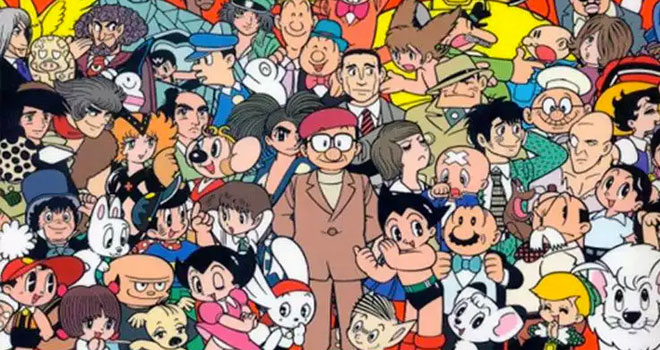 Japanese manga and anime are world-renowned, and can be considered as important aspects of Japanese culture. 24,420 votes were cast to see just which manga artists are representative of this Japanese art form.

Tezuka legitimized manga as an art form, as before him manga was simple comic strips. Often credited as the “Godfather of Anime”, he is considered the Japanese equivalent of Walt Disney, who Tezuka was deeply inspired by in his formative years.

Phoenix is my favorite manga, ever. I absolutely recommend everyone to read Future and Karma (they’re not chronological, each volume is self-contained).

Trivia: The Lion King is rumored to be heavily inspired by Tezuka’s Kimba the White Lion, a manga and anime series that predated the movie by several decades (1950 and 1965, respectively).

One half of a manga writing duo, named Fujio Fujiko, Fujio F. Fujio was the mastermind that created the world-famous Doraemon. If you haven’t heard of him before, Doraemon is a robot cat from the future that has a fourth-dimensional pocket full of gadgets from the 22nd century. He has come to visit us to help his owner’s lazy ancestor so that he can have a better life, by changing the past. Full of laughs and very imaginative gadgets, it’s a must-read (or see, in anime form) for all ages.

If you don’t know Dragon Ball, you’ve been living under a rock! The manga was a huge success, and anime arguably even more, and has become an inspiration for countless manga artists today. He was also the artist for the highly-praised Chrono Trigger for the Super Nintendo.

Beginning serialization in 1997, One Piece has become phenomenon worldwide with the manga selling over 345 million copies, making it the best-selling manga of all time. The anime series began in 1999 and is still ongoing as well, with so far over 629 episodes. He mentions Akira Toriyama as his biggest influence, and even had the honor to collaborate with him in a one-shot manga titled Cross Epoch, which contains characters from Toriyama’s Dragon Ball and Oda’s One Piece.

The other half of the creative duo Fujiko Fujio, his manga were darker and generally more for an adult audience. When asked which manga artist he respected most, he always answered Fujio F. Fujiko, and it’s apparent that his feeling towards his partner was strong, adding “Fujio is a genius” and “if it wasn’t for him, I wouldn’t be a manga artist.”

Best known for his basketball manga Slam Dunk, he’s an international success with most of his works being localized for manga fans around the world. While basketball is mainstay, he’s also the creator of Vagabond, a manga that retells the legends of Musashi Miyamoto, which received the Osamu Tezuka Culture Award in 2002. He also provided character designs for Lost Odyssey, one of the best RPGs on the Xbox 360.

A very prolific manga artist, Matsumoto is famous for his space operas that span the vast corners of the universe. Many of his works have been adapted to anime and also live-action films for the Japanese market, with both Space Battleship Yamato (2010) and Space Pirate Captain Harlock (2013) making its way onto the silver screen. If you’re a fan of Daft Punk, be sure to check out Interstella 5555, a music video of the entire Discovery album co-written and supervised by Matsumoto.

One of the few manga artists to experience success from both genders across both young and old, Adachi has been named a “master manga artist” that is “the greatest pure storyteller.” One of his rivals is Rumiko Takahashi (Ranma 1/2, Inuyasha), as they were both extremely popular in the 1980s for their works at the time. They would meet several times a year to share their thoughts and ideas. In 2006, Takahashi was asked what pen name she would use if she could not use her own name, and she responded, “Mitsuru Adachi.”

Detective Conan is Aoyama’s mega-hit ongoing manga with 82 volumes, accompanied by an ongoing anime with 732 episodes. The North American adaptation Case Closed is currently being steamed online through Funimation, and Viz Media is has recently released volume 49 in English.

Pioneer of comical manga, Akatsuka is known as the Gaga Manga King. Not only did he popularize comical manga, he also spearheaded the “magical girl” genre, in which girls use magical powers with Himitsu no Akko-chan debuting in 1962. It can be argued that, without Akatsuka, we wouldn’t have the recent cultural phenomenon that was Puella Magi Madoka Magica.